Kathryn is that rare breed of artist whose range of skills extends from fine art to commercial projects.

As both artist and designer her three-dimensional collage works are the product of minute observation, imaginative interpretation and exquisite craftsmanship, with an underlying dash of humour.

For Merrill Lynch she designed a financial skyline created from currency with intricate scrolls and curves. A heart created from red penny stamps was used as a national Valentine campaign by the Royal Mail.

On a larger scale, Harrods regularly commissions Kathryn to create window displays for their Knightsbridge store.

Consistently delivering to deadline, Kathryn has been based in London since 1996 and exhibits regularly. 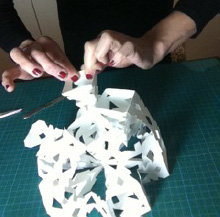 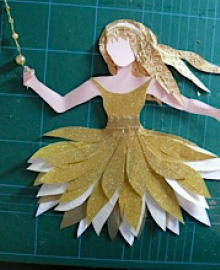 In the two-dimensional world of art, Kathryn Jackson's work literally stands out. Her witty three-dimensional paper collages are charmingly personal and each is unique, since it is the personality and interests of the recipient that determine what goes into it. One recent commission, for instance, was for an opera-lover whose wife didn't share his passion, he ordered a scene of the two of them in a box with him watching the stage and her reading Hello! magazine.

In order to produce one of her imaginative pieces, Kathryn first needs to know what it is for - a wedding present, a birthday, an engagement? - along with as much information as possible about the planned recipient and his or her interests. She also asks that items be collected that could be incorporated into the final piece: eg airline tickets, perhaps, for a frequent flier. Indeed, she often uses unusual papers such as old banknotes, bonds and passports in her work; a scene of San Gimignano in Tuscany, for instance, was made entirely out of local wine labels. Once that is done, it takes about three to four weeks to produce the final piece, depending on her other commitments.

What impresses her in particular are the efforts her clients make to keep the whole idea of the gift a secret. "I enjoy doing private commissions, because people put such a lot of time and thought into making their partners and friends happy, it’s great to see that side of life." She has no doubts that romance is alive and well, and cites as fairly typical the man who gave his wife a scene of the Empire State Building with a small plane trailing a banner with "Marry me?" on it as a wedding present, to remind her of where he'd proposed.